RIBA has awarded the 2017 Stirling Prize to Hastings Pier designed by dRMM Architects. 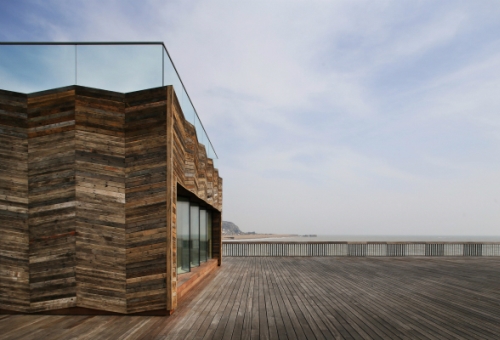 RIBA Stirling Prize, now in its 22nd year, is awarded annually to the UK’s best new building.
Hastings Pier, on East Sussex coast, overlooks the English Channel and has a history that dates back to 1872. For many years it was a popular pleasure pier famous for musical acts, but its recent past has been much more precarious.

Neglected for years, it closed in 2008 following storm damage, and in 2010, faced destruction when a fire ravaged the entire structure. Buoyed by the help of the Heritage Lottery Fund, a RIBA design competition attracted entries from around the world. London-based architects dRMM won the competition and immediately set about close consultation with locals and stakeholders.

The 19th century structural iron work, hidden below deck, has been painstakingly re-imagined, restored, and strengthened. The surviving Victorian Pavilion, one of two buildings on the pier, has been transformed into a glazed cafe-bar. The vast pier deck has been set aside for large-scale concerts, markets, and public gatherings.

The new timber-clad visitors center building in the center of the pier has a viewing deck on its roof, providing a space for visitors to experience picturesque views along the coast and across the English Channel. The architects have used timber throughout the project, much of it reclaimed from the original pier. The reclaimed timber has also been used to create the pier’s striking new furniture that was manufactured locally.

The vital importance of building sustainably runs throughout RIBA’s awards, and Hastings Pier deserves special recognition for its remarkable use of sustainable materials and positive social impact.