The Worshipful Company of Tylers & Bricklayers recently made a special presentation to the 2016 winner of Skillbuild. 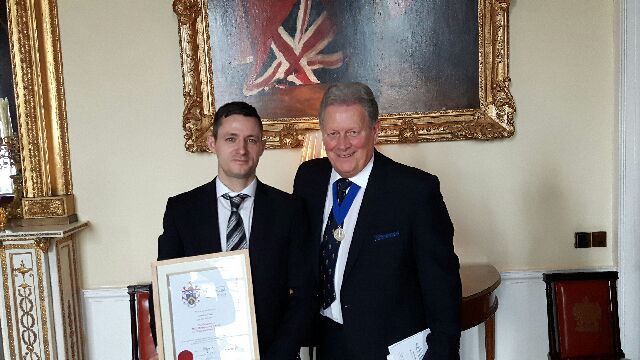 Gordon Cook from City of Glasgow College, with his tutor Andrew Pollock, attended an Awards Evening hosted by the Worshipful Company at Trinity House in Central London in March.

The Awards lunch is an annual event, which seeks to reward individuals who have excelled in their various disciplines. The Awards are presented across three different craft categories –Wall & Floor Tiling, Roofing & Slating and Bricklaying.

Gordon Cook won the Wall & Floor Tiling Award at Skillbuild last year. In all, 78 competitors took part in the finals, which were held at the NEC in mid-November, spread across ten categories.

The TTA has a long history of support for SkillBuild as it attaches importance to the ongoing work to drive up skill levels in our industry, working with young independent fixers. Throughout the year the TTA does much through its Training Committee, on seminars, developing qualifications and promoting training awards.

Bob Howard MBE, TTA director and chairman of the Training Committee, says: “It was really inspiring to be able to recognise the achievements of this young man at the Annual Awards Event of the Worshipful Company of Tylers & Bricklayers. It was a prestigious event which reflected well on the efforts of the TTA to raise the bar even further with regard to training and skills development for young people who are just starting out in our industry.”